Today I’m going to be talking about astaxanthin in skin care.

People claim that this ingredient is more potent than vitamin C. They claim that it’s going to be a better ingredient for brightening up hyperpigmentation, evening out skin tone, etc. 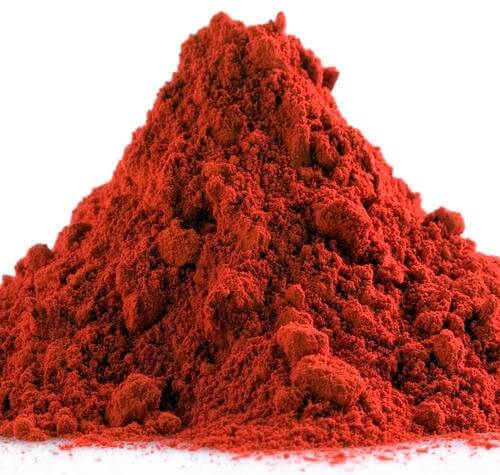 It’s an antioxidant that is in the family of antioxidants called carotenoids. These are compounds that give carrots their orange color. Astaxanthin is what’s found in lobster and salmon and gives it that reddish hue.

It is of interest to researchers because in laboratory studies it has shown promise for being a potent antioxidant. More so than maybe some other antioxidants in terms of scavenging free radicals.

When cosmetic manufacturers hear stuff like this, they take that little tidbit and run wild with it, create products focused around the ingredient and make all sorts of claims, saying that the ingredient is 10 times more potent than vitamin C.

But is it? Honestly we really don’t know.

Researchers examined the free radical scavenging ability of astaxanthin in comparison to beta-carotene and another carotenoid canthoxanthin. They looked at human dermal fibroblast cells in a dish that they had irradiated with UVA. They showed that astaxanthin was more potent than the other two antioxidants in terms of mitigating the damaging effects of UVA through scavenging free radicals.

But that are cells in a dish. They were not actually looking at application to the skin in humans, whether or not the astaxanthin actually gets into the skin and is able to scavenge free radicals. Or how stable is it in topical forms.

Antioxidants are all well and good. They have all these amazing potentials, but many of them suffer the limitation of poor stability, especially in topical formulation. They’re susceptible to oxidation. That’s always a limitation with antioxidants in skin care products.

As far as I know, I don’t see any studies that examine the stability and permeation of astaxanthin in topical forms when applied to the skin. Actually there are very few studies in people with topical astaxanthin to support a lot of the claims that cosmetic manufacturers are making about their products that contain astaxanthin.

It’s compelling that maybe in people it might help and reduce inflammation that contributes to aging and all sorts of disease processes. So you can see why researchers are interested in this, but that doesn’t make it something that we know much about beyond these small studies.

There’s a paper that was done in 2012 looking at both oral and topical application of astaxanthin. I keep seeing this study quoted a lot online but it’s not very good quality. They actually did a few clinical studies within one paper, which is odd.

They did open label, non-controlled, non-placebo-controlled, study just on women, like 30 women, who applied astaxanthin to their skin and then also took an oral supplement of astaxanthin at six milligrams per day. They applied the product daily and they took the pill daily.

At the end of eight weeks, they had better skin hydration and improvement in wrinkles, but that tells us nothing. Is it because they’re applying something to their skin. The astaxanthin is in a moisturizing vehicle. Of course that’s going to increase hydration and decrease wrinkle depth. That really doesn’t show us anything. There was no comparison to something a placebo.

Within the same paper they also looked at giving men instead of women an astaxanthin supplement. Again six milligrams daily. They looked at 36 men.

In this study, they actually had a placebo pill and at the end of the study, I think it was six weeks, the men taking the actual astaxanthin had an improvement in moisture content in their skin.

It’s very small. It’s just not conclusive. In other words more studies on actual people are needed to say for sure that this ingredient is beneficial when applied topically or ingested.

Astaxanthin can be isolated from microalgae. Is it safe? When applied topically it seems to be more than fine. I don’t have any issue with people trying this and using it. I haven’t seen any patients who have had irritation or anything that I can pinpoint to astaxanthin. It seems well tolerated.

If it is anti-inflammatory, like the laboratory studies would suggest, it would be beneficial for redness, irritation, sensitivity. But again, no clinical studies to back that up.

What about taking it orally? Is that safe?

It’s possible that it’s not. We don’t really know the safety of astaxanthin as a dietary supplement.

I will remind you that we do have literature to suggest that taking another antioxidant in supplement form, vitamin E, has been associated with increased lung cancer in smokers.

That always makes me nervous when it comes to any antioxidant supplement. I would say you’re better off eating vegetables that have carotenoids in them or salmon and getting it from dietary sources as opposed to a supplement.

I also came across some information on this supplement, suggesting that it might inhibit the enzyme 5-alpha reductase. That’s important because many people take medications that inhibit that enzyme and there are side effects associated with those medications.

The medication is usually low and not as common, but if you compound it with an ingredient that also inhibits that enzyme, you might get too much inhibition and have more side effects.

In my opinion, there’s more risk with taking a dietary supplement than applying this to the skin. It seems not be irritating or cause problems for people.

But whether or not it actually gets in and scavenges free radicals and does all of this stuff, I think no.

There are limitations with applying vitamin C to the skin. It too has poor stability and manufacturers come out with different ways to stabilize that.

One of the more impressive and convincing ways is the patent that L’Oréal has in the Skinceutical CE Ferulic. It has to be at a right pH in order for it to actually get into the skin. They’ve actually worked those things out to make that more of a compelling ingredient.

If you’re already using a vitamin C serum and you’re happy with it, just stick with that. I don’t think you need to go chasing this mystery ingredient. Everything that manufacturers say about it are really just claims.

If you do have hyperpigmentation, you might find yourself using a product that happens to have astaxanthin in there and I don’t think it’s going to cause issue for you and it may help the hyperpigmentation, but I don’t have data to support that claim.

For whatever it’s worth, I don’t think it’s a bad ingredient, but I would not be too confident in it and go chasing after it.

Astaxanthin For Skin! Does It Work?