In this article I’m going to be talking about a really popular trend of using Monistat for hair growth. I’m going to tell you does it work, how might it work, and why the hype?

I’ve taken notice of this trend for some time now. 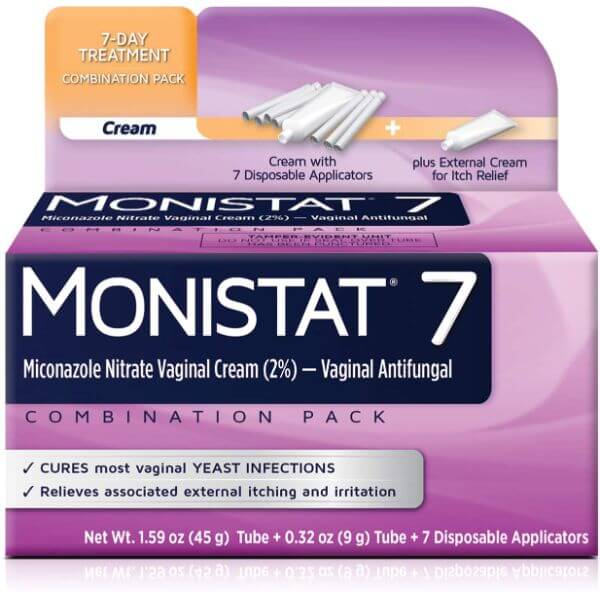 It is a cream used to treat vaginal yeast infections. It’s a brand name.

The active ingredient in Monistat is an anti-fungal ingredient called miconazole.

I’m going to get into that in this article.

For me that is daily, but for other people it’s going to be a few times a week. It just depends on your hair type.

Why is this so important?

One thing you may not realize is that there’s a lot of surface area on your scalp that needs to turn over and exfoliate and shed.

The act of shampooing and cleansing helps remove those shedding skin cells. Even for people with a totally healthy scalp, if they stop shampooing, after about one to two weeks they will start to have noticeable flakes of skin cells that are trying to be shed.

Does Monistat Work For All Hair Loss?

Now that you understand how important the health of your scalp is for good hair growth, why shoukd you put a yeast infection cream for the vagina on your scalp to help with hair growth ? Does it work?

Truthfully, there are zero clinical studies of using miconazole cream a.k.a. Monistat for hair growth.

If there are no clinical studies showing that it works, why are people so enthusiastic about doing it and claiming that they see great results?

It’s actually not completely unreasonable to consider Monistat for a healthy scalp.

Monistat is an azole antifungal, similar to another ingredient ketoconazole.

We have actual data showing that ketoconazole in shampoos can actually help in reducing the burden of this yeast that lives on the skin and can drive a lot of inflammation into the scalp.

Anything that causes inflammation in your scalp can aggravate certain types of hair loss.

For example, in people who cope with dandruff, one issue with dandruff is that the skin cells proliferate too quickly and not appropriately. They end up getting mounded up and as a result you have these large aggregates of skin cells stuck together.

That’s why dandruff starts to get red, itchy, uncomfortable. All that inflammation in the scalp definitely can contribute to hair loss, either through breakage or through potentially impacting the hair cycle.

As I said, we have some studies suggesting that using an antifungal, namely ketoconazole, might help in certain types of hair loss.

Not all types of hair loss have anything to do with the inflammation from that little yeast.

For example, there is a traction hair loss; it’s due to pulling really tight hairstyles that put a lot of stress on your scalp. It has nothing to do with that little yeast. It has to do with the traction on the scalp and those tension forces.

So in that case you’re going to want to change your hairstyle to a more loose-fitting style. You want to stop wearing tight braids, tight ponytails.

You want to avoid using styling products that maybe have a lot of alcohol in them. Namely those products that are marketed as being long lasting hold. They dry out the little baby hairs and leads to breakage and weakens them even further.

Avoiding headbands is another thing to keep the traction hair loss at bay. And then of course avoiding a lot of heat styling that can further weaken the strands.

Nothing to do with that little yeast!

Another type of hair loss that’s quite common is something called alopecia areata. It is an autoimmune attack on the hair cells and leads to sudden patches of baldness.

That in most cases will calm down and the hair will regrow, although in other cases it doesn’t. I those cases you want to see your dermatologist. There are prescription treatments for that but it doesn’t have anything to do with a little yeast.

Another type of hair loss that a lot of people are dealing with is telogen effluvium. It’s basically increased shedding. This happens about three months after you’ve had a stressful event.

The yeast malassezia has nothing to do with telogen effluvium or shedding.

You can develop shedding after pregnancy, it happens when you start and stop certain medications, namely birth control pills. That can be very distressing to people, but truthfully it’s not a permanent type of hair loss. It’s just a shift in the hair cycle.

If we do undergo a stressful life event, the hair cycle will shift and put more hairs into a certain resting phase and then
you’ll subsequently have a more of a mass shedding.

But it has nothing to do with that little yeast on the scalp. So the anti-fungal cream is not going to do anything for it.

For What Type of Hair Loss Monistat May Work?

The type of hair loss where you could potentially make an argument for the myconazole a.k.a. Monistat cream is going to be pattern hair loss, androgenetic alopecia.

This is thinning related to age and hormones and genetics.

How do you know if using Monistat is actually going to work for you?

Is it harmful to use Monistat?

I don’t think so. I can’t really see it being that problematic, unless you find that the ingredients in Monistat are irritating to your scalp, in which case definitely don’t do it.

So it’s not harmful, it seems low risk, low reward.

An alternative to using the Monistat is to simply cleanse your scalp more frequently. That helps with shedding of the skin cells, reduces the burden of inflammation.

Let’s think about who is motivated mostly to be doing the Monistat thing.

It’s people in the natural hair community who have textured hair that doesn’t tolerate frequent shampooing.

I can definitely see why people are motivated to try this.

I don’t think it’s unreasonable to try, especially if you you have a hair type that just doesn’t tolerate frequent shampooing and you’re getting a lot of flakes build up, irritation in the scalp.

It might be something to consider trying. It seems very low risk to me.

That being said, if you do develop any type of irritation to Monistat, I would say stop because that’s going to take you several steps back.

It seems pretty unlikely to cause harm in my opinion.

If you look at the ingredients in Monistat beyond the active ingredient miconazole, it actually has a pretty short ingredient list.

There’s no fragrance or dyes. It’s intended to go in the vagina, so it shouldn’t cause problems when applied to the scalp.

It does have propylene glycol. It is not a bad ingredient, but for some people it is irritating. It’s the ingredient in Rogaine, an over the counter hair loss treatment, that causes the most irritation for people.

Does It Grow Hair Actually?

To be clear, Monistat might help with hair loss ultimately, but it’s only going to help with a certain type and it’s not actually growing your hair. It’s reducing the inflammation that drives hair loss.

That’s a important to keep in mind because some people out there, with perfectly healthy scalp and no scalp disease, might just want to grow thicker hair and try it out.

It’s not going to work that way!

If you have a healthy scalp and you’re not dealing with any form of hair loss, this isn’t something that’s just going to grow your hair.

That’s what I can tell you about Monistat for hair growth. It doesn’t actually grow hair, but it might reduce the inflammation that contributes to certain types of hair loss, namely androgenetic alopecia or pattern hair loss.

Overall it’s pretty low risk, but likely low reward. It’s all going to be dependent on the type of hair loss.