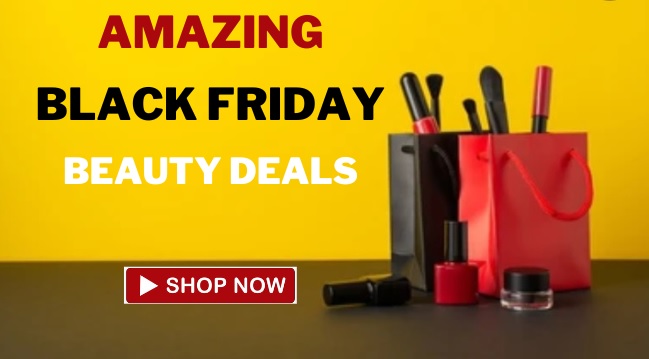 Today I’m going to clarify for you all some of the key differences between salicylic acid and benzoyl peroxide.

These are both active ingredients that are FDA approved for the treatment of acne and are sold as FDA-approved, over-the-counter acne medications.

You will find them in washes for acne as well as toners, gels, spot treatments, masks, etc. 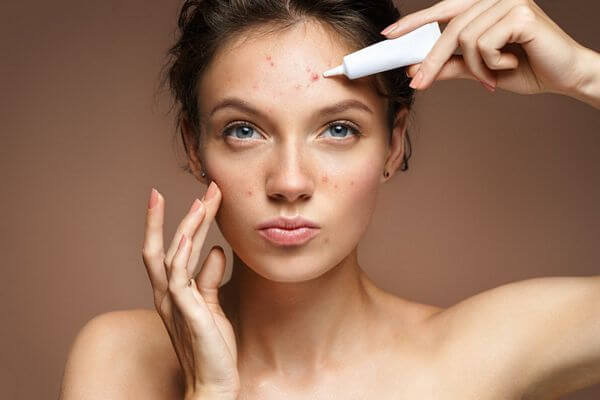 You have to remember the four components of acne pathogenesis.

1. Inflammation in the skin. That’s recently been shown to probably be one of the first offenders in the skin. Before anything else shows up on the scene there’s going to be some degree of inflammation around the pore that kicks acne off.

2. There’s also a problem with the skin cells lining the pore. They proliferate at an abnormal rate and are unnecessarily sticky so they plug up the pore and that leads to blackheads and whiteheads.

4. Sebum oil within the pore. Our oil gland is making oil that coats the surface of our skin and hydrates it. It’s important for skin barrier function, but with people with acne, there can be what’s called seborrhea or increased oil production.

That little bacteria that lives down there and chews up the oil from our sebaceous gland and releases these inflammatory breakdown products that further contribute to acne.

Those are some of the four key components of how acne progresses and what needs to be addressed with treatment. 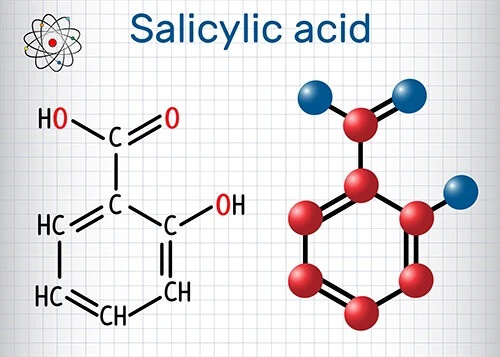 What is it salicylic acid? It is a carboxylic acid that is lipophilic, meaning it loves oil and grease. It concentrates on the oily surfaces of our skin, like our forehead, our nose. It concentrates within our pore and that’s exactly where it needs to go in order to help in addressing the pathogenesis of acne.

What does it do once it gets there? Its key strength in the treatment of acne is it decreases corneocytes cohesion.

Remember I told you that within the pore, these skin cells proliferate and get kind of stuck together. Salicylic acid will help unstick that stuff and help in keeping pores from becoming clogged.

In other words, it is a great treatment for blackheads and whiteheads as well as acne in general.

Blackheads and whiteheads are part of acne pathogenesis but sometimes they can occur on their own, without some of the other characteristic lesions of acne.

Salicylic acid has such an affinity for the oily surfaces of our skin. But it actually doesn’t do too much to the rest of the surface of our skin, in between the pores, what’s called the stratum corneum, the stuff on the very top layer of the skin.

The pore is down deep but on top you have you have the stratum corneum, which is like a basket weave or a roof of our skin and salicylic acid does not have as much of an affinity for sticking around in the top layer of our skin.

While it does a great job exfoliating within our pore, it’s less aggressive at exfoliating the rest of our skin structure. It tends to sting less than some other exfoliants and it tends to be less irritating and slightly easier to tolerate in comparison to many other acne medications.

Salicylic acid has modest anti-inflammatory properties and it also has mild antibacterial properties.

Believe it or not, it is protective against UVB. It has some UVB blocking ability because of its ring-like structure.

When you put salicylic acid on your skin, it will auto neutralize after a while and form crystals. Those crystals are then rinsed off of the surface of the skin, they don’t stay on there. However, the crystals do remain behind in your pore and exert ongoing comedolytic effect and anti-inflammatory effect.

Salicylic acid has a nice outcome and it concentrates in your pores and stays there for a prolonged period of time, without it really affecting the other structures of your skin. 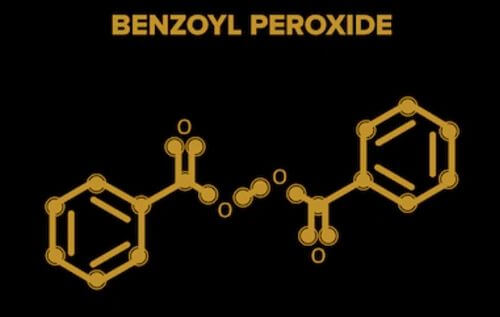 That is its greatest strength!

How does it do this?

It oxidizes proteins on the surface of that bacteria and kills it. Unlike other antibiotics, no bacterial resistance has been demonstrated to benzoyl peroxide to date.

It’s a much safer antibiotic to be putting on your skin as opposed to other other antibiotics that are prescribed either topically or orally for acne. The bacteria will not become resistant to this ingredient.

Even better, if you are on one of those other antibiotics, whether they be topical or oral, using those alongside benzoyl peroxide will reduce the risk that bacteria on your skin will become resistant to those ingredients.

Benzoyl peroxide is really beneficial in treating bacterial diseases and addressing the bacterial component of acne.

Like salicylic acid, benzoyl peroxide is also comedolytic. It does not however have the same preferential localization to the pore, while it does concentrate there, it also will affect the other structures of the skin. So it will result in a lot more irritation appealing and peeling.

If you’ve ever used benzoyl peroxide, it is very drying and very irritating. Benzoyl peroxide is, also like salicylic acid, anti-inflammatory.

Unlike salicylic acid, benzoyl peroxide is not going to offer any protection against ultraviolet radiation or UVB.

When benzoyl peroxide is applied to the surface of the skin, it’s actually broken down by cysteine in the skin. It is something called benzoic acid, which is in a lot of foods so it’s very safe. It’s not absorbed in the body.

Daily use of a 10 percent of benzoyl peroxide containing product has been shown to reduce the burden of cutibacterium acne within the pore by 98%.

Which One is Better For Acne?

Honestly it’s not that simple, it’s not a yes or no!

Salicylic acid does a better job in treating the plugged up part of acne, exerting long term control against blackheads and whiteheads then benzoyl peroxide, but benzoyl peroxide does that as well.

While it may seem odd that benzoyl peroxide is so irritating, it also is probably a better anti-inflammatory ingredient in comparison to salicylic acid.

I say this because benzoyl peroxide is superior in the treatment of the more inflammatory types of acne in comparison to salicylic acid.

Acne that consists of a lot of red. painful bumps, tends to respond better to benzoyl peroxide then salicylic acid.

But for many patients, they can’t hack benzoyl peroxide whatsoever. It doesn’t work for them and so salicylic acid does the job just fine.

For a lot of patients we actually combine both ingredients, either together, one right after the other or in an alternating fashion. For example, it’s not unusual to advise a patient to use a benzoyl peroxide wash in the shower and then leave on a salicylic acid product in the evening.

Or use a benzoyl peroxide wash in the evening and a salicylic acid wash in the morning. Or alternate every other day.

There’s no magic formula. It’s very nuanced to the individual patient. It’s not a cookbook formula. In other words, you need to find which combination and which forms of the ingredient, whether they be washes or leave on products, are gonna work well for you.

Those are the strengths of each ingredient in terms of acne but what about some of these other conditions.

If you’re someone whos acne, for example, heals with a dark mark, salicylic acid is going to be a good ingredient for you to consider using because not only does it stay in that pore, exerting ongoing acne control, but it also will help to brighten up the hyperpigmentation and reduce the risk of post inflammatory hyperpigmentation.

Another plus of salicylic acid over benzoyl peroxide is that you could also think of it as an anti-aging ingredient.

It normalizes skin cell biology and turnover to a certain extent, although not in the same way that a retinoid would, but it exfoliates sun damaged skin cells and it’s got that little bit of UVB protective ability.

If you’re thinking of an anti-aging ingredient, it’s gonna be salicylic acid, it’s not going to be benzoyl peroxide, it doesn’t really do it offer much for anti-aging.

Salicylic acid is not gonna do anything for improving wrinkles and fine lines per se. That’s gonna be more of your alpha hydroxy acids and your retinoids.

Salicylic acid is not really gonna fix the fine lines and wrinkles but it is helpful for improving the dispigmantation associated with photoaging.

Salicylic acid is also what you will find in many wart treatments. It’s a great treatment for warts because warts have this big mound of sticky skin cells on top of stratum corneum and salicylic acid helps to dissolve some of that.

Is benzoyl peroxide only good for acne? No.

Benzoyl peroxide is another great ingredient for a lot of other things. It’s antibacterial and that’s really where its strength lies.

It can be used for other diseases for which there’s some kind of little bacterial component that drives a disease. Folliculitis that can happen in your scalp or anywhere on your body. A lot of times folliculitis is due to bacteria trickling down into the hair follicle and causing these little itchy bumps.

Another skin condition with painful inflammatory bumps that is localized around hair follicles is hidradenitis suppurativa. Those painful bumps in the groin, armpits, under the breasts, under the abdominal folds. Benzoyl peroxide can help in controlling the bacterial burden in the skin and also reducing inflammation that drives that disease. Benzoyl peroxide helps to normalize that bacterial burden in that disease.

Also very good for ingrown hairs, whether they be in the beard area or in the groin area related to bikini waxes or shaving. Benzoyl peroxide is great for that condition because it is similar in a sense to some of the same features of what leads to acne.

You’ve got inflammation around the pore, this time inflammation due to hair removal or the hair growing back into the skin and causing a foreign body reaction that leads to the bump. Benzoyl peroxide helps reduce that inflammation, it helps reduce bacteria in the skin that can further get excited and worsen the disease.

It also will help in exfoliating the skin so that it reduces the chance that the hair that’s been shaved will creep back into the skin, puncture down and cause that bump. So it’s a great treatment for for ingrown hairs.

Those are some of the things that benzoyl peroxide and salicylic acid are good for.

Hopefully you can understand the strengths of what each ingredient does and why it works so well for certain situations.

But ultimately it’s best left up to your treating healthcare provider and you, because it is a journey. They call it the art of medicine for a reason. It involves talking with a patient, seeing what’s been working. It’s never a one-size-fits-all approach.

I hope this article was helpful in learning the differences between benzoyl peroxide and salicylic acid. Hopefully you learned a ton about all the different ways that each ingredient can be used.

How to get rid of melasma on face

Salicylic Acid vs. Benzoyl Peroxide For Acne – Which is Better?