A lot of people, both men and women, ask this simple question “should I get a facelift?”

Today I’m gonna go over six tips that you need to know about if you or somebody you love is thinking about a face lift.

Should I Get a Facelift? 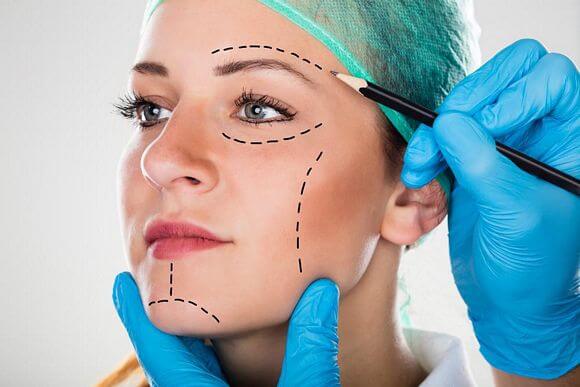 The first thing you want to consider with facelifts are the scars. Facelifts create scars. There’s no such thing as a non scar or scarless facelift.

The scars typically extend all the way around the ears, behind the ear and they also extend quite often down the back of the neck or into the hairline.

Scars can also extend across the sideburn area and other times they’ll even extend up into the temple area.

The thing you’ve got to consider with facelifts is that the scars are permanent. They will never disappear. So if you have a facelift and you’re 55, you’re gonna have those scars when you’re 95. Those scars will be there forever.

There are risks of thickening of scars. All patients should get a top grade medical silicone based scar cream. But even by applying that cream, even if you get lasers to them, even if you inject them with steroids, those scars can still thicken.

So if you’re thinking about a facelift, keep in mind that there are gonna be scars. There is no guarantee how those scars will heal. Even the best surgeons have patients with scars that don’t look so good.

What a surgeon can do with scars is they can prevent track marks. If you see a person that’s got little track marks, those can be prevented by taking the sutures out early, but the actual scars cannot.

That’s the first thing you need to consider with facelifts – permanent scars.

Second thing is that there are some facelifts that also incorporate what we call a mid facelift. That’s when you get a lifting of the cheek up higher.

A lot of times the surgeons will take the scars and they’ll bring them across and then actually bring the scar all the way up into the temple area. What you can get is this sweeping up of the cheek up.

You’re lifting the cheek up and you think “well, my cheek has dropped, but if they’re lifting it up, isn’t that gonna be better?”

Not always and if you’ve ever seen people who had too much work done, especially too many facelifts, a lot of times you get this lifting up where they can see a sweeping of the cheek upward. That’s probably the best way describe it’s, like a sweeping up of the cheek or that kind of windswept look.

So you got to be careful. Make sure when you do face list that the scar ends is the sideburn area, don’t bring it up into the temple area because, once again, you don’t want that sweeping up look of the cheek.

If you’re thinking about having a facelift or somebody you love is thinking about it, ask where those scars go and if the scars go up into the temple. You really want to avoid getting that sweeping up type of a look.

A lot of times people will bring those scars across the actual sideburn and up a bit. I’m not a big fan of that because it means that your sideburn should end where that scar is. But do you want to have the same sideburns length for the rest of your life? Not me! Although I know a lot of good surgeons that do it that way.

That’s a second thing – to be careful with pulling up of those cheeks too high. You don’t want to have that windswept type of a look.

I had a guy who came to see me many years ago. It was real nice guy, he was in his late 40s and he said “I had a facelift done recently and I’m really unhappy!”

I said what’s the issue, why are you unhappy with the results and he said “I had a facelift done at this quickie facelift center.”

He said “I had a facelift done and I didn’t get the results I was looking for.” This is everybody’s fear of having plastic surgeries and you’re not gonna get what you’re looking for.

He said “I spent all this money, I had a facelift and I’ve got these permanent, horrible scars around my ears.”

At the time, a lot of them, when they did this mini facelift, they just whip stitch this stuff shot.

He said “But my nasolabial folds are still there. So now I’ve got scars, I spent all this money and I still have nasolabial folds.” He was really unhappy, which obviously he should be.

The fact is that facelifts don’t typically treat nasolabial folds. Just because you pull your face back and those nasolabial folds go away, doesn’t mean that if you have a facelift that they’re gonna go away.

What happens is initially when you’re tight and things are swollen, those lines may disappear, but once things settle down and they relax, those lines come back.

If you are having a facelift and the doctor says these are gonna go away, you gotta wonder is that doctor telling you the truth. He or she may not be!

So third thing is that facelifts don’t treat nasolabial folds.

I get people who come to see me and they’re in their 40s and they want a facelift and they say “I hear that the younger you do surgery, the better it is, because your skin is better and the results last longer.”

That is true. The younger you have a facelift, the longer the results will last. But on the flip side, there are a couple of things you need to be aware of.

For a lot of people, the benefits don’t outweigh the trade-offs. The positive of getting a little bit lifted is outweighed by those permanent scars.

I also believe that the younger you are, in general, the greater the risk that those scars can look thicker, because your collagen is more robust. There is a greater chance that you may get a hypertrophic or even a keloid scar. Whereas as we get older, the collagen thins in our skin and we have less risk of thickening of those scars.

That’s why men and women who are in their 70s and they have skin cancer surgery, where they take a big chunk off the nose and then they move skin from the forehead down there and they have these big scars on the nose, you give it three to six months and you can hardly see those scars at all.

Because when they’re older, the collagen is not quite as robust. You don’t get quite as aggressive a response. Scars heal better.

When you’re younger however, you do that on somebody who’s in their 40s and, holy cow, that is not gonna look good!

You really got to be careful with those scars. Make sure that the benefits outweigh the negatives, which are the scars.

Only 3 Facelifts in Lifetime

Also you want to make sure that you don’t do too many facelifts in your lifetime. People in their late 40s want a facelift. If you are going down that road of facelift surgeries, think in your mind that you can do up to three!

If for some people three sounds like a lot, for other people it doesn’t. You can do up to three facelifts. The results last anywhere from 7.5 to 15 years. You want to plan that out.

Really you want to consider that you don’t do too many of them. Do a maximum of three facelifts in your lifetime. Two is even better.

I mentioned above that facelift will help you look about 7.5 to 15 years younger. There are actual studies that look at how long did the results last.

It lasts anywhere from seven and a half to fifteen years and there are a lot of things that can impact how long your facelift last.

One is the quality of your skin. If you’re a smoker, if you get a ton of sun, then it’s not going to last as long.

If you eat a great diet, if you eat the rainbow different colored vegetables and fruits, if you get rid of processed foods, if you don’t eat much sugar, if you wear your sunscreen, if you take good care of your skin, then those results are going to last you even longer.

These are some of my facelift tips. I hope that they have been helpful for you and that they answered, to some extent, the question asked at the beginning of the article, which is should I get facelift.

How to lose fat under chin.