This article is all about solutions for sagging neck skin or droopy skin under your chin. This is something that virtually everybody, once we hit our early to mid 50s, has to deal with and sometimes even earlier.

There are some solutions of treating sagging neck skin that don’t involve surgery.

But first let’s talk about what exactly causes the droopiness of your neck. It is typically caused by three different things.

The first thing is pretty obvious, it is loose skin. As we get older our skin gets looser and can sag.

The second thing is we can develop loose muscle. There’s a muscle called the platysma muscle, which is a sheet like muscle in the neck that extends up the neck over the jawline into the lower face.

As we get older, that muscle can actually droop and as it droops, it creates these little platysmal bands, banding. You may see that loose muscle in people who are a bit older and they have thin necks. Sometimes you can see the banding and that’s basically loose muscle. 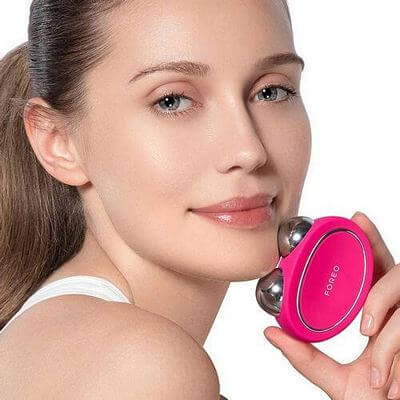 But we can also develop fat that is drooping as well. Drooping fat creates jowls but you can also get drooping fat under the chin that can be visible too.

So sagging neck skin typically has a combination of those three factors – the droopiness of the skin along with drooping muscle and even excess or drooping fat pockets.

How can you treat it without surgery?

If you’re in your 30s and 40s and the droopiness isn’t that bad, then you may want to try a non-surgical treatment.

This solution is not something that creates a dramatic improvement. It’s not a facelift by any means but for those people who are in their 30s, 40s and even 50s and they’re just looking for that modest tightening, then ReFirme is a great option. It’s especially a great way to maintain the tightness that you already have.

Typically with ReFirme, each treatment takes about 30 to 45 minutes. There’s no pain with it. You may feel a little bit of warmth with it, but in general it’s not painful at all. You may have a tiny bit of redness afterwards but usually not even that.

We do recommend several treatments every few weeks, anywhere from four to six treatments to get started with it and then a treatment every few months to keep the results up.

If ReFirme isn’t aggressive enough for you and your past your 30s, 40s you’re in your 50s and even early 60s, and you want something more aggressive, than a solution is called Ultherapy.

It is a treatment that utilizes ultrasound to heat up the deep skin more aggressively than ReFirme to cause that skin to tighten up.

The can vary and the pain of that treatment can be fairly uncomfortable. It is also fairly expensive. It can cost upwards of a couple thousand dollars and the results are pretty variable.

But Ultherapy can create a really nice change for people: 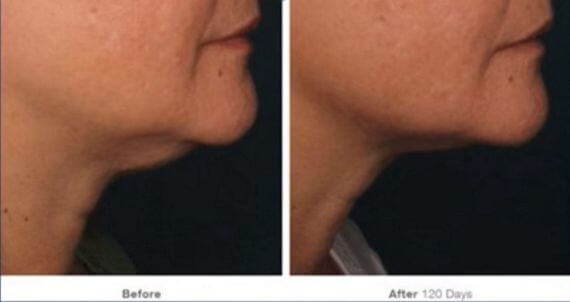 This before and after photo shows that you can get a pretty nice improvement with Ultherapy in the droopiness of the neck. But the problem with Ultherapy is not everybody gets the impressive result that you’re seeing there.

If you’re thinking about Ultherapy, talk to a doctor who’s performing it and get a good idea of what that doctor thinks you can get prior to putting the money down. It may also be worthwhile asking them what happens if we wait several months to see the results and I just don’t get anything. Is there any option for you to get your money back or partial refund or maybe apply that money towards something else.

So these are the two non-surgical treatments that I recommend for the neck area. But if you’re not doing surgery for the neck, you can get some change but it’s never the same as an actual facelift.

Let’s talk about surgery. If you are anywhere from your mid 40s on and the looseness is quite severe, then your best option is a lower facelift.

This is a very popular procedure but this is real surgery. Let me describe how the surgery works.

Then the incision extends in the crease behind the ear, way back here where you can’t see it, over and then down in front of your hairline.

The neck incision and that scar really varies, depending on how droopy you are. If you’ve got a real droopy neck then that scar back there will be lengthened to try to get the optimal lift of your neck. If however your neck is not that bad, then the scars can be shortened.

Once they make those incisions, they lift the skin up off of the fatty layer and then they remove the extra fat pockets from the jowl area along the neckline and underneath the chin.

They remove that extra fat utilizing a specialized one-sided liposuction device. The fat is removed and that helps to contour that area.

After that is done, then they take the skin and re-drape it towards the ears and utilizing those incisions they can cut that excess skin out. By doing that, you get a nicer, sharper jawline. What you get afterwards, however, are permanent scars.

The surgery takes anywhere from three to four hours, depending on how much needs to be done. You’re going to feel a bit tight. It a good sign that they did something because things will relax with time and they will get a little bit looser. No matter what they do, no matter how much they tighten you up, they are going to relax.

This is typically not a real painful surgery. Most patients may take a couple of pain pills the first few days and that’s usually about it.

Not a real painful surgery but you are going to feel tight. You’re going to look tight. You may get some bruising as well.

Usually people will look pretty presentable within a week or two and you should look good hopefully within about two to three weeks. You can look in the mirror and say “wow, I think I’m really liking what’s going on.”

People typically go back to work anywhere from two to three weeks after the procedure is done. You do find that most of the swelling is gone after about six to eight weeks, but it can take a full four to six months for all the swelling to go away.

Scars will be permanent and they can take anywhere from six to twelve months to completely mature.

What are the risks of surgery?

The first thing is you’re going to have scars. There are risks that those scars can get thick, they can get wide and they can even turn into keloids, although that’s quite uncommon.

One thing that we recommend is starting scar creams usually about two to three weeks after surgery. If there’s any sign of early thickening of those scars, then we would recommend starting a laser treatment at that time. In worst case scenario, we can consider injections of a steroid.

Other risk of surgery is bleeding. That’s why they keep you overnight in the hospital to monitor for that risk. That risk is probably 2 to 3 percent or less.

There’s a risk of infection, which is very low risk.

There’s a risk that you may find that things loosen up a little bit more than you want. A lot of the tightness afterwards really depends on the quality of your skin.

Typically women take much better care of their skin than men do and for that reason, women who have facelifts have a longer lasting and nicer results than men who have facelifts. So there is a chance that things are going to recur a bit, just as things relax. Much higher risk of that in men than in women.

Other risk can involve numbness. Everybody’s going to have some numbness with this surgery. Numbness with a facelift is an expectation, not a complication. That numbness typically goes away but there’s always a risk that some of that could be permanent.

What we do worry about however is damage to a motor nerve. There’s a nerve called the facial nerve that runs along the jaw line and comes up to the corner of your mouth. There is a risk of that nerve getting injured. If that’s the case, you can usually get a crooked smile out of it.

If that nerve is injured, which is extremely rare, 99 percent of time that nerve will come back. So nothing to worry about but it may take some time.

Lower Facelift Before and After 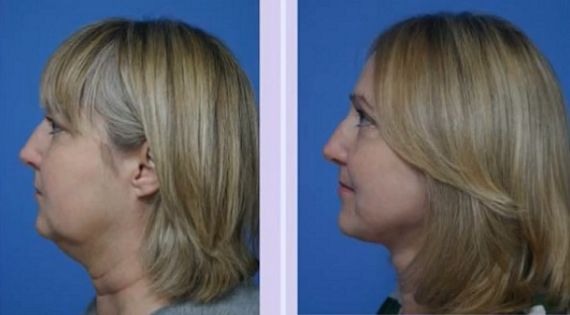 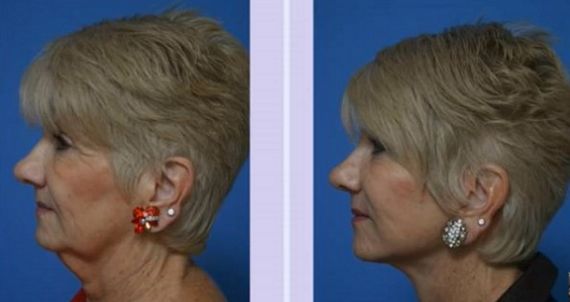 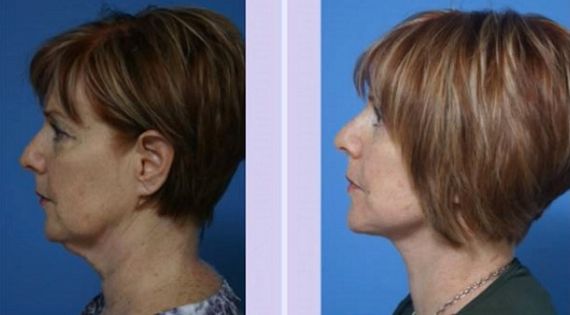 You can see a big change in the neck of these women. You can see that sagging neck really being lifted with the lower facelift. You can’t get this type of result with non-surgical treatments. The only way to get this is with actual surgery and that’s why there truly is no substitute for a good facelift.

If you’re in your 30s and 40s, then trying something non-invasive and really simple like ReFirme can work real well to keep things nice and tight.

If you’re noticing things starting to loosen but you don’t want surgery, it’s not that bad yet, then Ultherapy may be an option.

But if you’ve really gotten things droopy and you are in mid 40s or older, and you want to get that dramatic improvement, then the idea is a lower facelift.

I hope this has been helpful for you in deciding what are the best solutions for sagging neck skin.